Behind the scenes of a Luvin Arms’ rescue

You can help by sponsoring an animal resident to provide them lifelong care
Listen to this article
00:05:45

People have this image of Old MacDonald’s Farm, with happy cows living on green pastures, but that’s just so far from reality. Some farms might be less cruel than others, but there is no such thing as cruelty-free milk.
-Erica Meier, President, Animal Outlook

Scan the dairy section of your local grocery store, and you will see the illusion everywhere: milk cartons with images of happy cows on idyllic farms. This is a marketing gimmick. There is no such thing as a happy cow living on an idyllic farm. In reality, the dairy industry isn’t a harm-free industry at all.

Like all animal agriculture industries, animals are only seen as things used for profit in the dairy industry. Male babies are taken from their mothers at birth and shipped to slaughter houses for veal meat.

Female babies are taken from their mothers at birth, and eventually take their mother’s place as dairy cows. And all mothers are hooked up to machines to pump their milk, their udders extremely and uncomfortably enlarged due to infection. They are forcibly impregnated each year until their bodies can no longer produce milk.

Then they go to slaughter as well.

Luvin Arms shares the story about an individual named Marley Rose, a beautiful cow born as a twin on a dairy farm.

When a mother dairy cow gives birth to a girl and a boy, the girl is most likely infertile and therefore worthless to the dairy industry.

She is considered a freemartin, and is shipped to slaughter with her male twin. This was Marley’s destination: an early death along with her brother, Maverick, until they were both rescued.

They spent their first few weeks in the hospital. Unfortunately, Marley’s beautiful twin brother did not survive. You see, babies are seized from their mothers immediately after birth so that the milk meant for their children can be pumped and sold for profit to humans who don’t need cow's milk.

The individual who needs cow’s milk, the baby cow, is deprived of the very thing that he or she needs to survive. Many cow babies don’t even survive the first few weeks of life because of extreme malnutrition and separation anxiety. This was the case with Marley’s brother, Maverick.

Marley was only seven weeks old when she arrived at Luvin Arms. 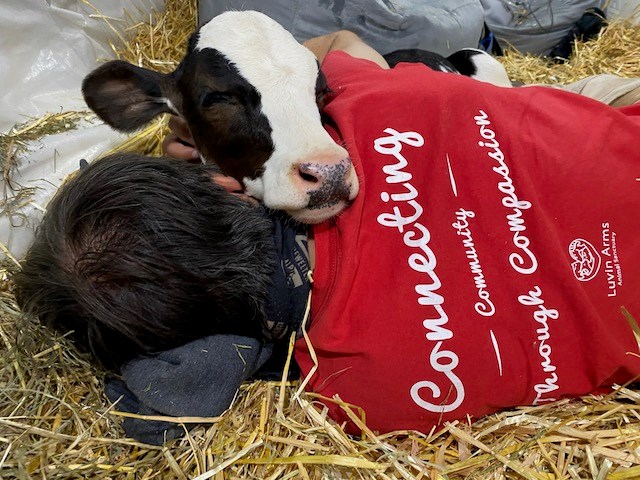 Now she was living at a safe sanctuary, with plenty of food and water.

Her loving caregivers spent the first few nights with her in the barn, held and caressed her so she wouldn’t feel alone. Separated from her mother at birth and losing her brother to the inhumane practices of the dairy industry, Marley was still learning to trust humans. 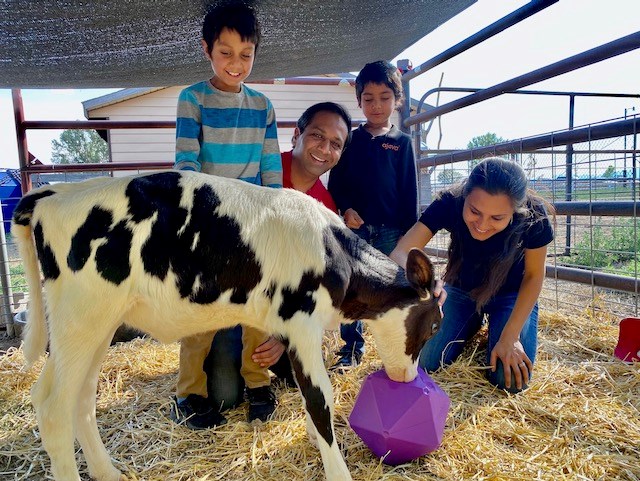 She needed a companion in order to thrive.

First came Blue the dog. They were wonderful friends when Marley first arrived. They played and napped together. 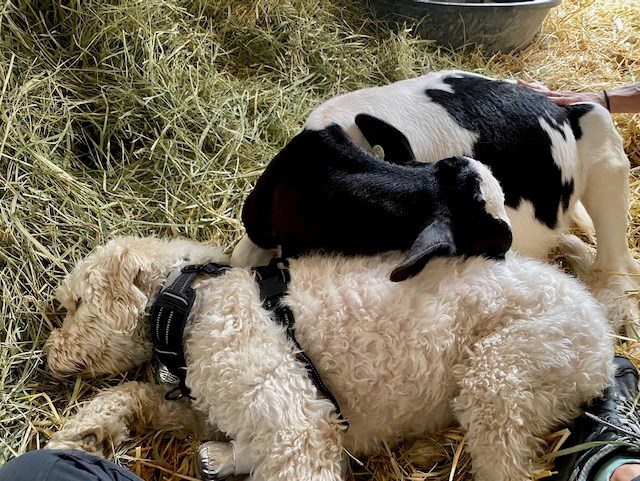 But of course, Marley Rose grew and grew, and outgrew Blue.

Next came the sheep family, but the sheep were a bit afraid of Marley, and the day came when Marley Rose needed a companion just like herself. 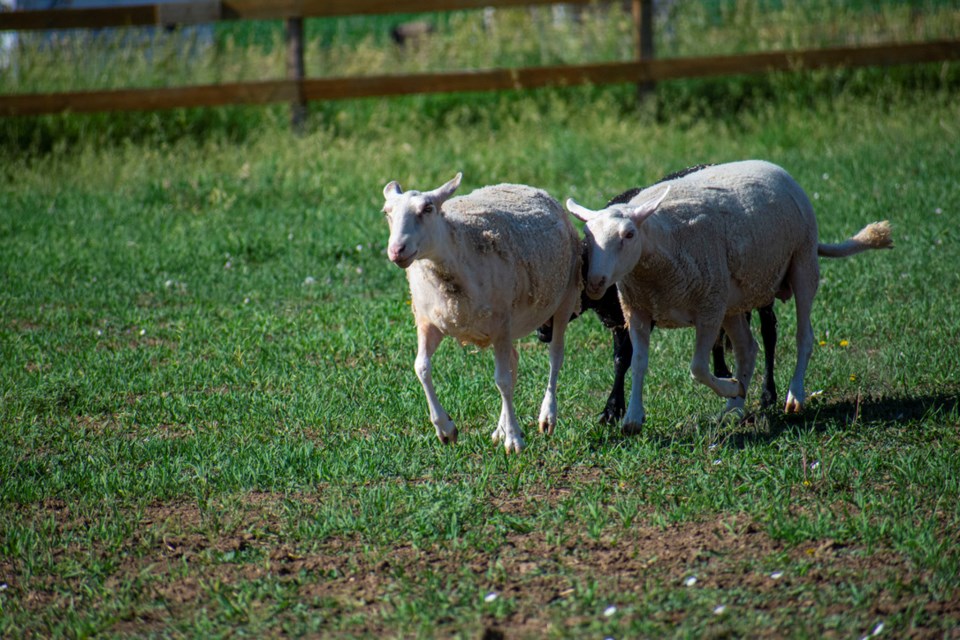 Cows crave connection with each other. They have best friends they prefer to spend time with, and they can recognize their loved ones from cows they don't know.

Yet, Marley was too small to be integrated with larger cow-boys. She would socialize with them through the fence, yearning to connect with somebody who looked like her. 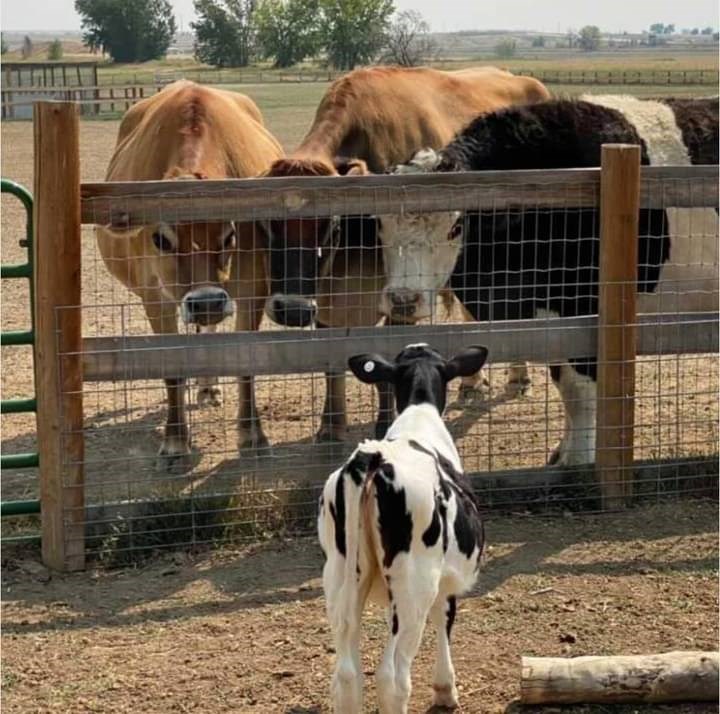 Luvin Arms is situated in the rural part of Erie, Colorado. It is surrounded by traditional farms and ranches. In fact, their next door neighbor is a dairy farmer.

One brave day, they got up the nerve to ask the seemingly impossible: would the dairy farmer be willing to release a freemartin calf to them as a companion for Marley? They held their breath. To great surprise, they were willing to release a baby to Luvin Arms, with one caveat made by the farmer’s wife: the calf needed to be named Samantha.

A seed of compassion was planted that very day: this individual cow was no longer a thing; in that moment of clarity, she became a somebody to the farmer’s wife, a somebody with a name.

Luvin Arms gladly obliged and brought Sammy home, safe to live out the rest of her long days without fear, unlike her former herd just over the fenceline.

Only nine days younger than Marley, Sammy was very nervous of humans at first.

Marley taught her how to trust her new human family, based on her own experience upon coming to live at Luvin Arms. Sammy and Marley now spend every waking moment together, developing the kind of friendship everyone hopes for in life. The owners of Luvin Arms wonder sometimes to this day - does the farmer’s wife ever peer over the fence at Sammy and smile with tears in her eyes, getting to see her beloved Samantha grow up, safe and happy?

Marley and Sammy are now ambassadors for their species. Because they came to live at a safe sanctuary as young individuals, they now trust humans more than most other cows ever will.

They participate in tours, and gladly give visitors their famous cow cuddles. Earlier this year, the Sanctuary hosted a grief support group for victims of the Colorado Marshall Fire, with Marley and Sammy as Co-facilitators. 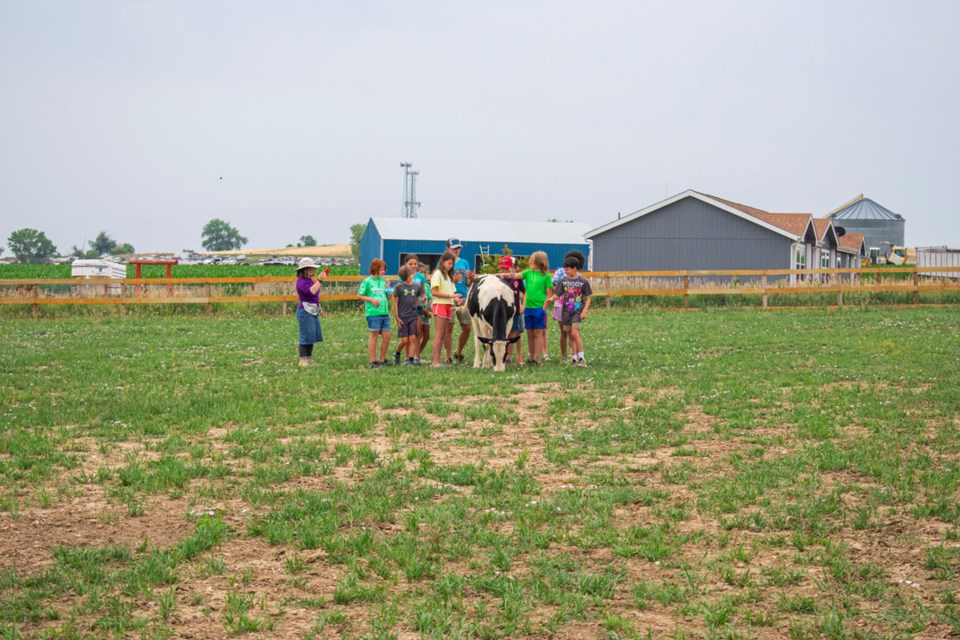 Did you know that just hanging out with cows lowers your own heart rate? When you come visit, you will experience those therapeutic cow cuddles for yourself.

Today, Marley truly lives in the idyllic scene that you see on milk cartons - free, happy, safe. But unlike the image on the milk cartons, Marley’s reality isn’t a marketing gimmick. It’s a life of peace at Luvin Arms (take a look). 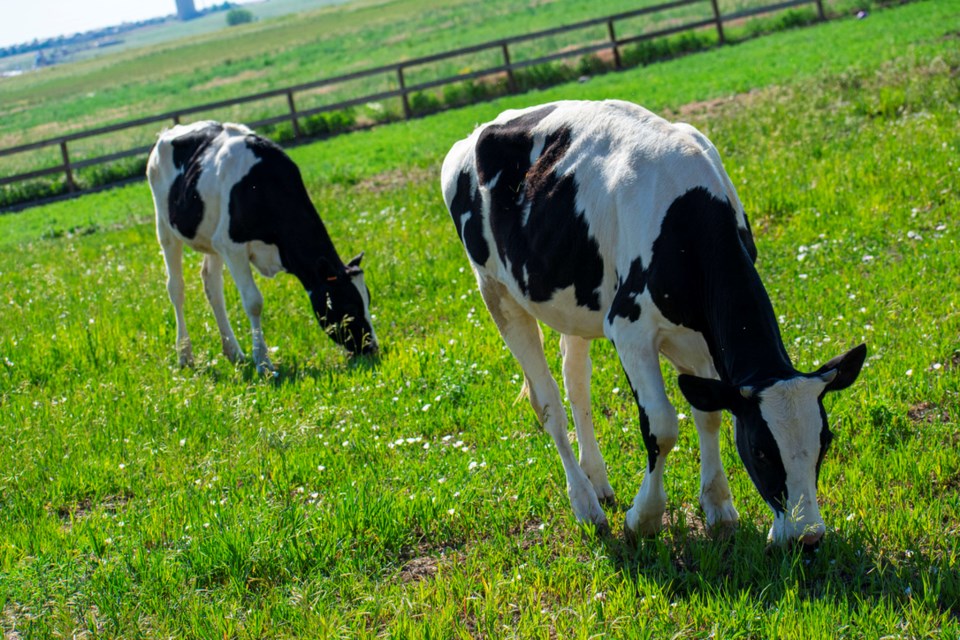 If you would like to sponsor Marley Rose which helps us provide her lifelong care, please visit here.

This has been shared 0 times

Broomfield Kiwanis Club volunteers to improve childrens' lives
May 31, 2022 5:00 AM